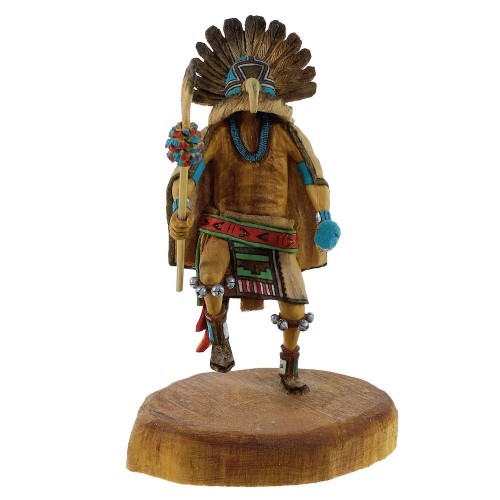 One of the most interesting facets of Native American culture that you may have seen are the fascinating figures , known as Kachina or Katsina dolls. These figures are heavily rooted in Native belief and have an important role to play in many of the ceremonies and rituals. These spirits are most commonly associated with the Hopi tribe, believed to be their ancestors that come back to the village and its people to help them through the year. They hold certain rituals for their coming and going and the Hopi tribesmen dress in their masks and garb to pay tribute to these divine being.

There are a few other tribes that hold these spirits as sacred too, like the Zuni and Tewa Village. Depending on the culture you’re researching, you’ll find some tribes believe the Kachina to be spirits of the forest itself.

In all cases, these spirits are seen as messengers to the Great Spirit and carry the prayers and wishes of the Native American tribes to this being.

As for the Kachina dolls, they also play a significant role in Native American culture. They were initially carved for the sole purpose of ritual but later were made to be used as a teaching device for young Native American children.

When the settlers came to the new world, the tribes started to design these pieces in an artistic way to use for trade. Since then, Kachina dolls have evolved into their own art form and are still made with natural materials from the Native artists that hand carve and paint them.

These dolls are also believed to evoke the spirit they represent and protect the owner from harm and bring them good luck. These figures have become extremely popular in the Southwest region and continue to gain popularity.

One important thing to remember is that their unique appearance is just as original as their function in Native Society. While some Kachina are more light-hearted and playful, like the Clown-Kachina, others are more stern, like the warrior Kachina. Some examples of Warrior Kachina are the Bear Kachina, the Eagle Kachina, and Mudhead Kachina.

These unique personalities come alive in Native American ceremonies, where seasoned tribesmen and leaders imitate their characteristics through dance, song, and how they interact with other members of the tribe that are spectating.

These figures have a rich history and are made with the quality to reflect the deep religious respect that Native artists have for their culture. I have a few myself and love when I get new ones as gifts.