No Comments on Southwest Jewelry: Traditional vs ModernPosted in Southwestern Jewelry Posts By d4g4Wl8d48ZPosted on March 24, 2017

The Southwest has typically stayed true to its roots, keeping traditional Native American and Southwest-inspired art the same. However, as time marches endlessly forward, art has a way of evolving.

Some artists in the Southwest have taken it upon themselves to deliver and entirely new style that has changed the scope of Southwest art and how people perceive it.

I’ll start by saying that the pieces themselves are the same; just the styles have changed a bit for modern tastes. Take a look at these bolo ties I’ve posted so you can get a better idea of what’s traditional and what’s contemporary.

This bolo was made by Navajo artists Tommy and Rose Singer. The turquoise stone set into sterling silver with traditional lined patterns all reflect the Native American and Southwest standard of art.

On the other hand, this jasper bolo is a fresh take on the style. Fellow Navajo artist, B. Benally, tones down the more ornate features 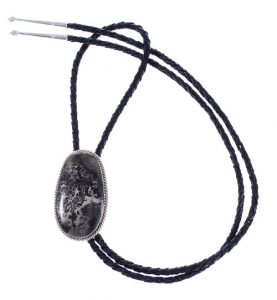 of traditional bolos by using the dark stone Jasper and cuts the stone into a somewhat asymmetrical piece.

Both are wonderful, in my opinion, but the second piece can go more with modern fashions and doesn’t overtake a person’s outfit. Rather, it can complement the features of whatever you’re wearing.

The landscape may not change but the styles of the Southwest are starting to. People are starting to catch on to the new designs and celebrities have been wearing them for years. Southwest and Native American inspired designs have a way of speaking to the soul.

It’s these subtle changes that make all the difference to fit into modern society and appeal to the next generation. While traditional styles will always remain a part of society I think we won’t mind making room for next year’s collection of cuts and designs.

That being said, I hope you enjoyed this post and good luck out there adapting the Southwest style!